Asa Ingram was born in Spartanburg, SC. His hometown served as an inspiration for many of the stories in his novel, Tallyho in the Squat. He graduated from Clemson University. Asa has spent almost his entire life in South Carolina, mostly in the Upstate. He currently resides in the Charleston area where he spends more time than he should on bar patios with the locals.

Asa has an affinity for bourbon, cigars, barbecue, and college football--staples in every Southern man's life. He grew up raising Beagles with his father and, at one point, illegally smuggled rabbits from Kentucky to South Carolina just like Bill and Jimbo. On fall Saturdays, he can be found at all-day marathon tailgates before watching his Tigers play.

Asa has always admired the backwoods Southern life, and the humor that comes with the territory has inspired his writing. He uses his own experiences combined with Southern oddity to craft his stories.

To contact Asa for interviews or book events, email him at asa@asaingram.com.

Follow Asa on Twitter to find out updates about his book or to throw back a few beers with him around Charleston. 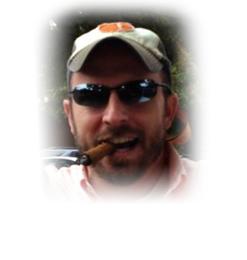